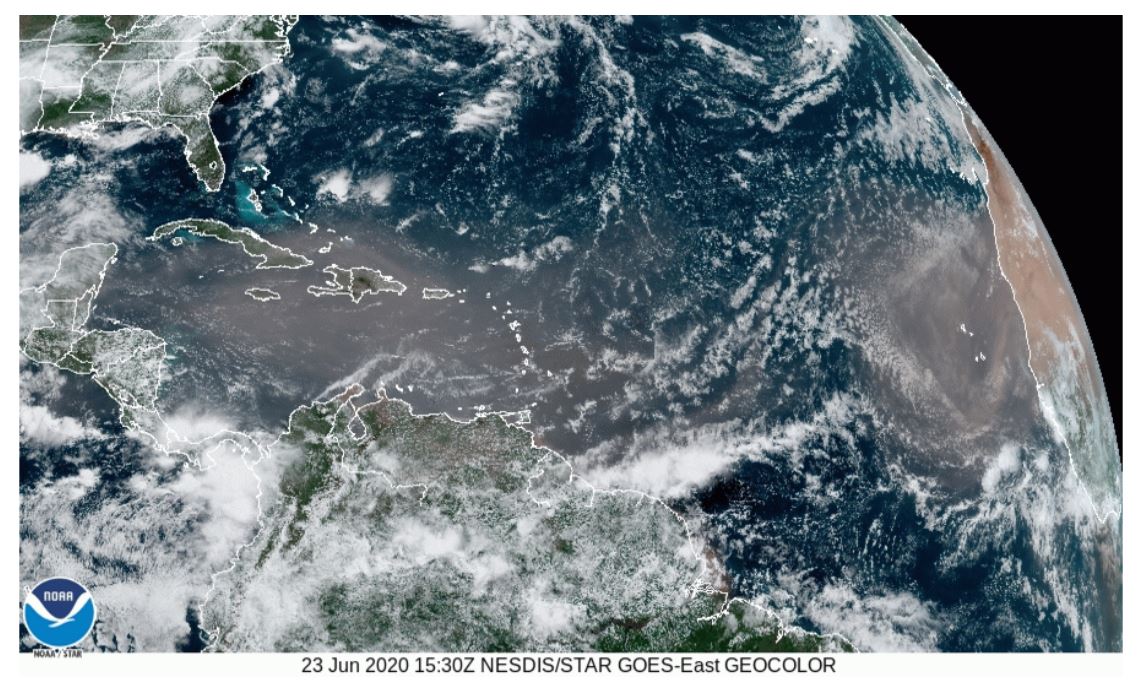 The relatively quiet weather pattern over the last week or so may have allowed you to hear about a seemingly “new” weather phenomenon – the Saharan Air Layer.

While you may never have heard of this before, this is nothing new. The Saharan Air Layer (SAL) forms as a large mass of dust over the Sahara Desert, and then gets spread westward over the Atlantic Ocean by the easterly trade winds. Normally, the SAL quickly ramps up in June, before eventually peaking in July and August. These clouds of dust, which typically take up residence from 1-3 miles up in the atmosphere, are effective at reducing tropical development and can frequently reach the Caribbean Islands.

However, the upcoming dust event is a far more notable one. Not only is this current dust plume exceptionally thick… it is going to reach the United States and could potentially overspread a fairly large portion of the country.

On Sunday afternoon, the International Space Station flew over the Saharan dust layer in the central Atlantic Ocean. Col. Doug Hurley tweeted the photo above showing just how obstructive the dust was from space. You can clearly see the distinction between the clear air and its optical path to deep, blue water, versus the thick cloud of dust which shows up as the dirty, brown blanket.

Here is just one example of what this looks like from the ground. The dust cloud reached Jamaica on Monday evening. The sunshine was quickly drowned out a thick layer of dust, which created a milky haze as far as the eye could see.

The visible satellite image at 11:30am ET / 8:30am PT on Tuesday clearly shows the current expanse of the plume. The dry, dusty blob stretches from its origins in Africa (right side of the screen) to the Yucatan Peninsula (left side), and will continue to spread northwestward.

By Thursday morning, dust is expected to reach the Gulf Coast states, as seen in the forecast graphic above from World Winds. For the most part, the dust reaching the US should not be too thick. The presence of dust in the air can actually lead to some vibrant sunrises and sunsets in the days ahead. The particles in the air scatter more light, and if the dust particles are high enough above the ground and in low enough concentrations, get ready for some vibrant colors!

By Sunday, forecast models suggest that the Saharan dust could be in the sky over much of the eastern United States… from Texas to Michigan, and all points eastward to the coast. Some of the dust might become a bit thick over the southeastern states. If you look closely at the map above, you’ll notice the pocket of darker browns that is hinted at over the interior southeast in locations such as Alabama, Mississippi and Tennessee. If the dust layer becomes too thick, this can actually subdue and ruin the chances of a vivid sunrise or sunset. Too much dust will simply drown out the sunlight, and can even lead to some air quality concerns.

Our sunset forecast is beginning to hint at some dust-induced beauty by Thursday evening in the southern US. The image above is Thursday’s preliminary prediction, using output from the GFS computer model. See the surge of reds and yellows in the Gulf of Mexico, and across the southern states? That is what we will begin to keep our eyes on, as the dust begins to infiltrate the Gulf Coast states.

Keep checking in with us at SunsetWX over the next few days. We will keep you posted on where the Saharan dust plume is headed, and who could be in line for an extra vivid sunset! No dazzling from the dust… yet.